The new £6.5m University of Winchester University Centre was won by invited competition in 2004 and represents our third project for the University.

The 3000sqm building sits on a steeply sloping site, where the natural topography of the campus is both a virtue in terms of character and a hindrance to access.

The building combines clarity of conception with an enjoyable celebration of transparency. The complex brief is skillfully handled, enabling the various components of the project to be used together or in isolation. 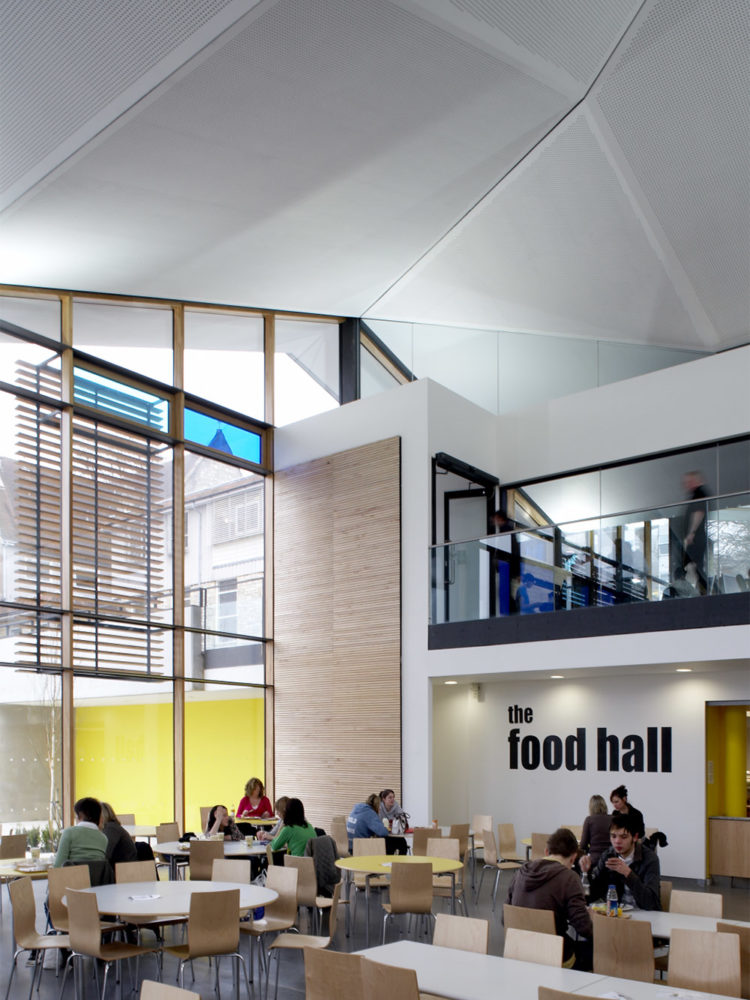 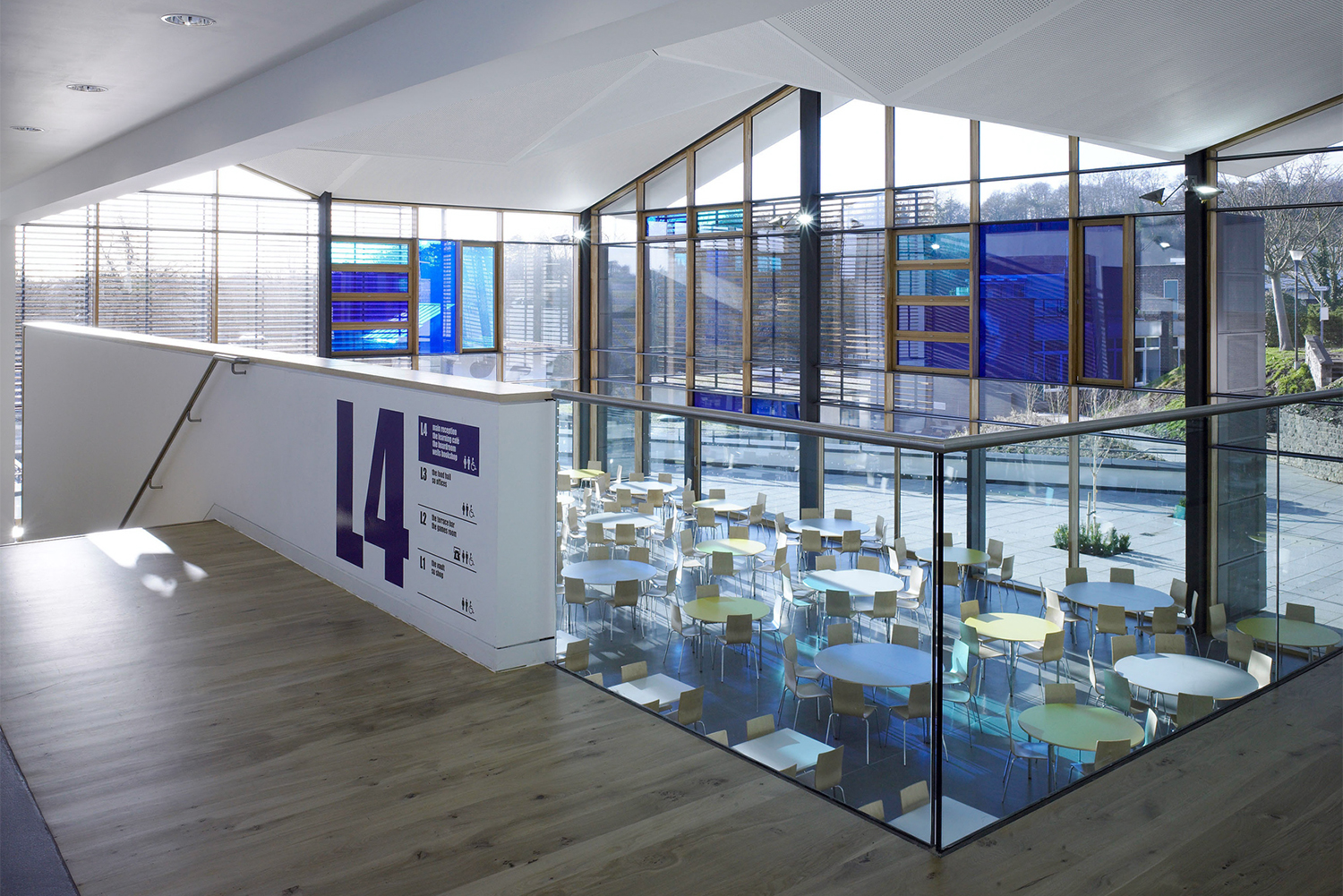 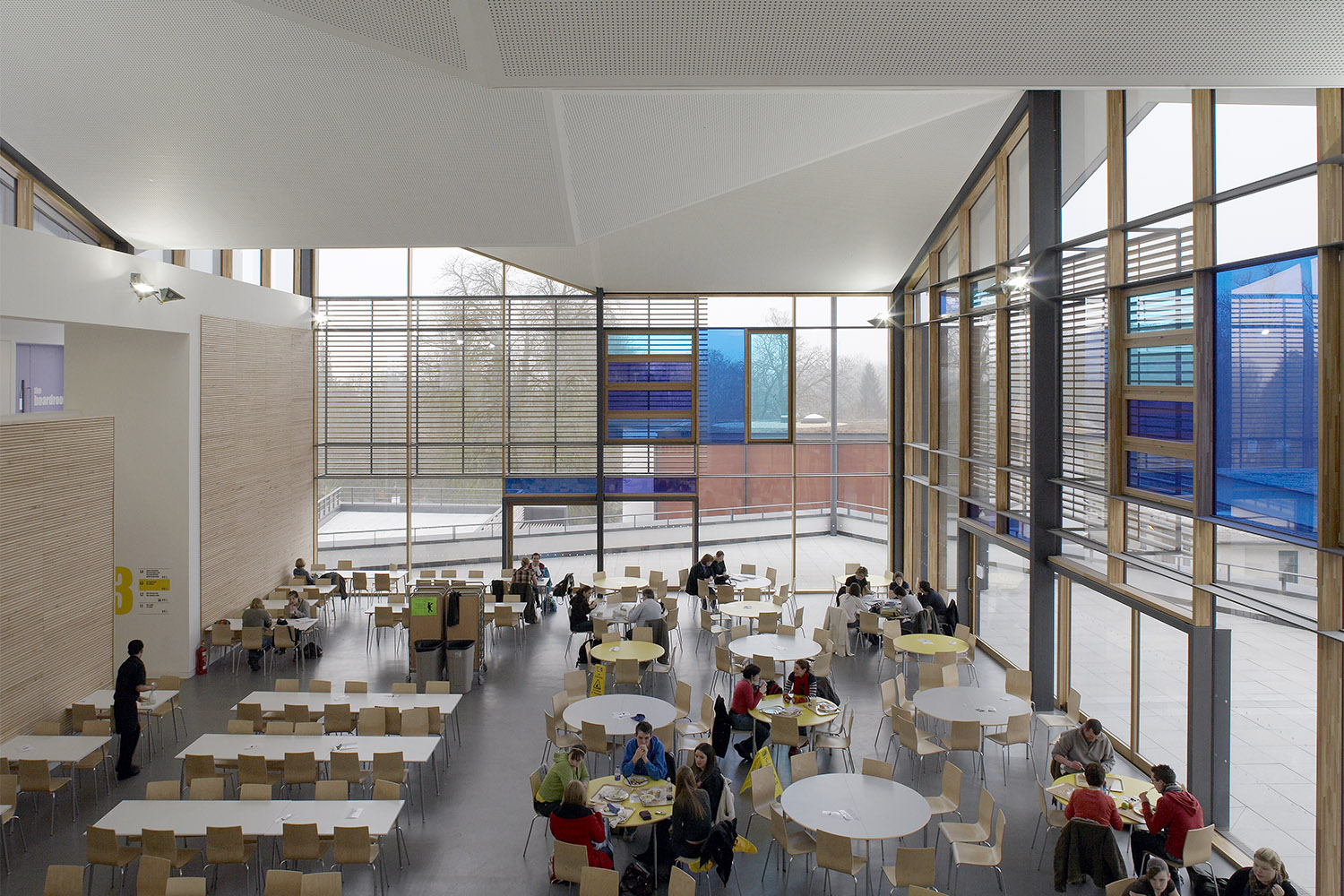 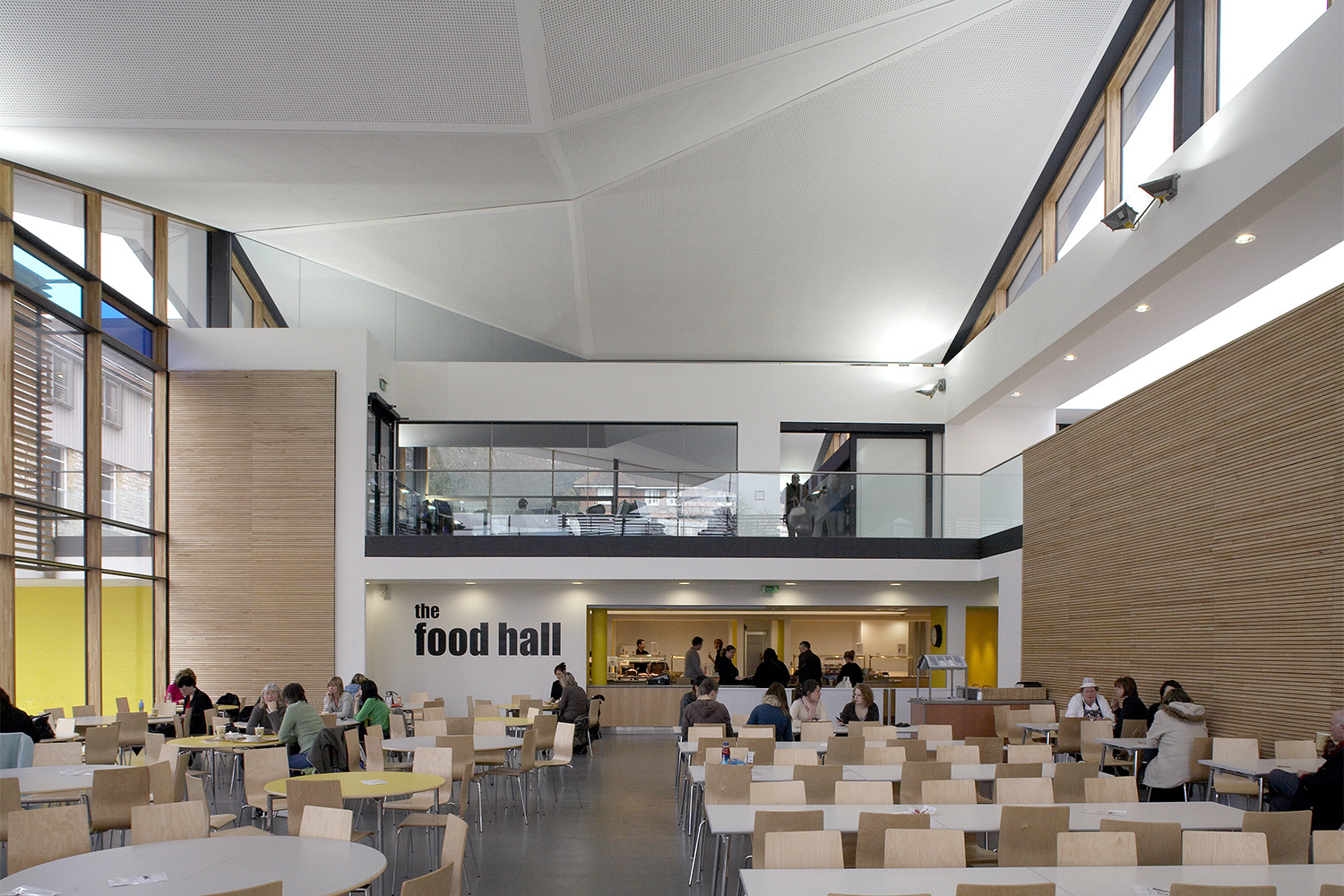 The topography of the University campus determines that roof forms are important, since they are seen from high points of the campus.

Whilst the John Stripe Theatre (our second building for the University) has a ‘living’ sedum roof, the New University Centre was designed with an undulating roof form. It underwent many iterations and was explored in different three-dimensional media, including card models, which were a valuable aid to the early stages of that process.

The site forms an important boundary to the main campus and adjoins the point of main entrance for the University but previously offered a very poor ‘public face’. The site was steeply sloping and graded and there was a poor level of disabled access to the existing building, and elsewhere across the campus. The new building reinforces the edge of the campus providing an improved threshold to the Sparkford Road.

The site slope of four storeys is exploited by digging the students’ union into the lower two. Above it the double-height dining hall has an ingenious folded roof. Its glass wall is adequately protected from sunshine and orientated towards the main circulation of the university to create a new centre within the campus.

The building is conceived in two halves in terms of its section: The lower level consists of a series of stepped terraces in which the venue space is placed ‘inboard’ to the site and as buried within the topography as far as possible to mitigate any noise break-out. The upper level consists of the food hall, opens out to landscaped terraces and sits beneath a delicate lightweight roof structure. 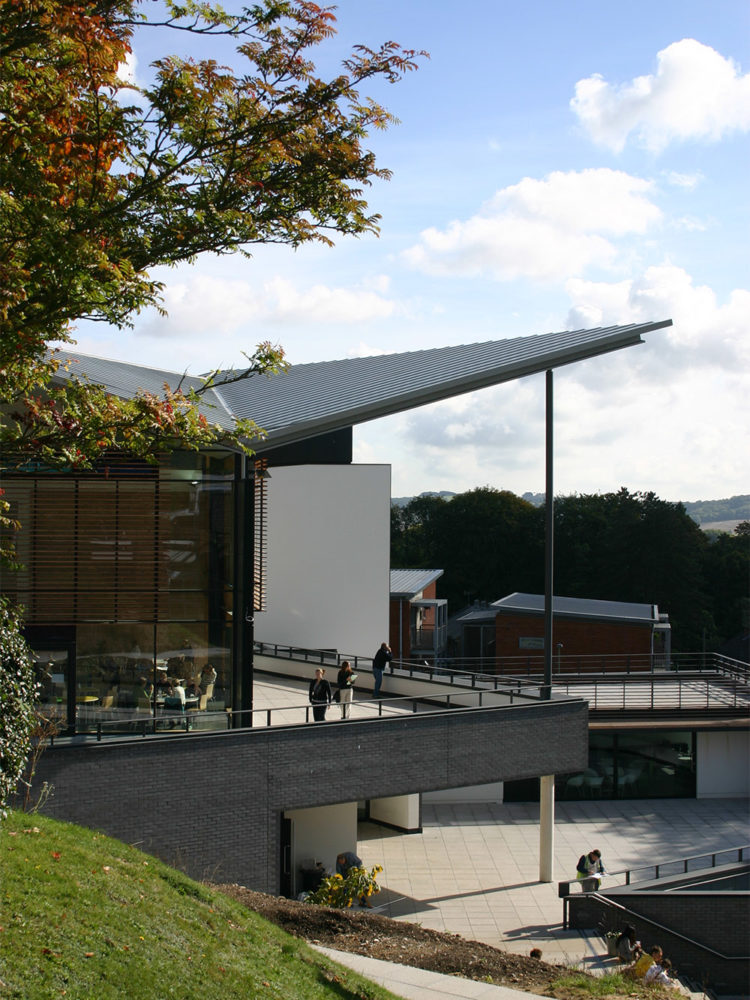 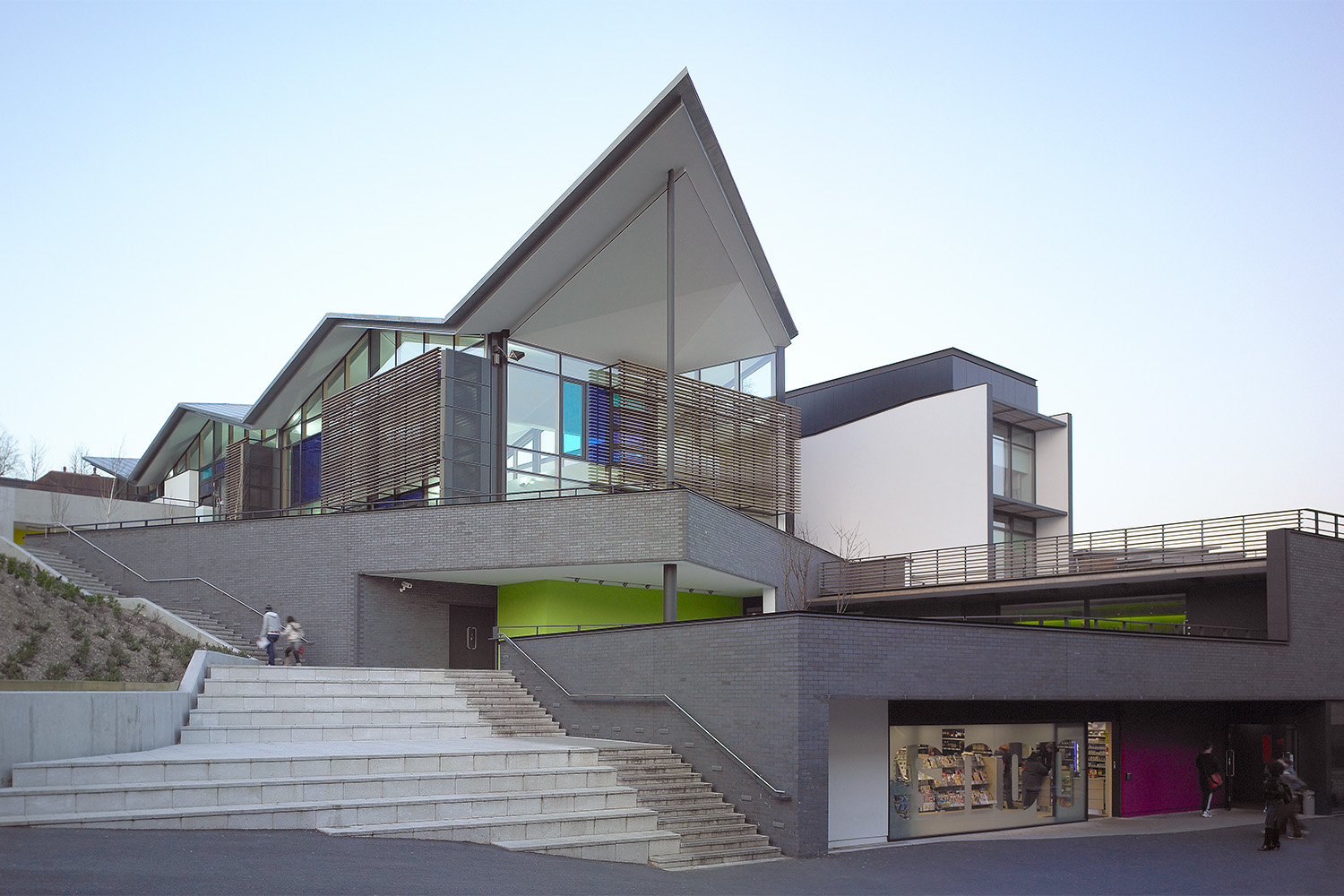 As architects for the new University Centre, Design Engine provided imaginative, efficient and cost effective professional input at all times. 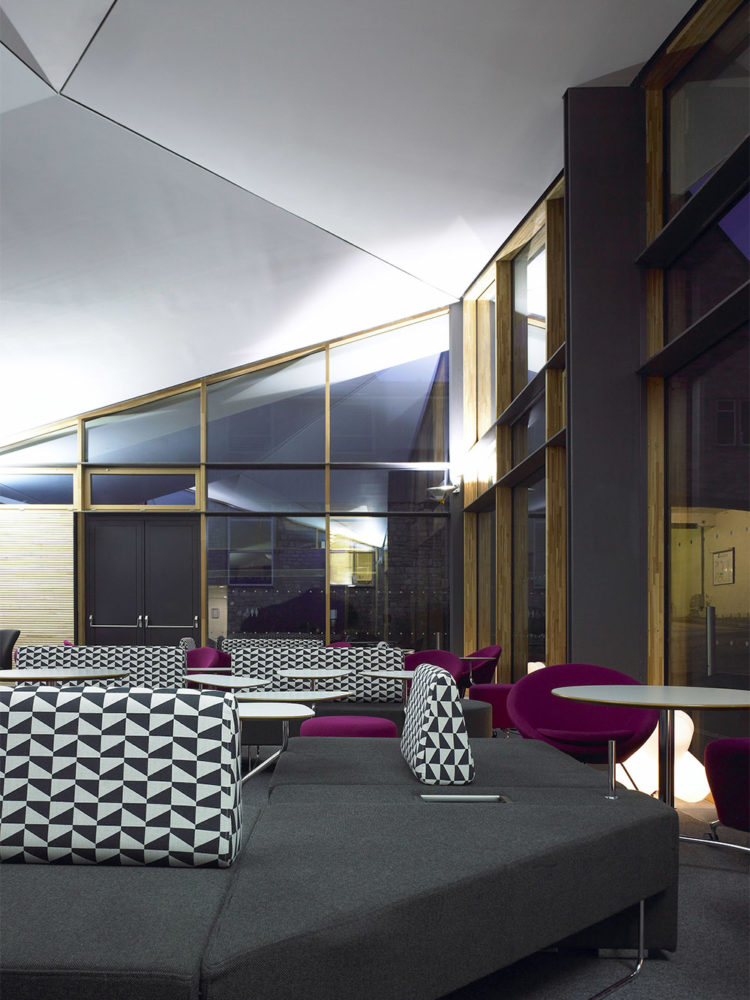 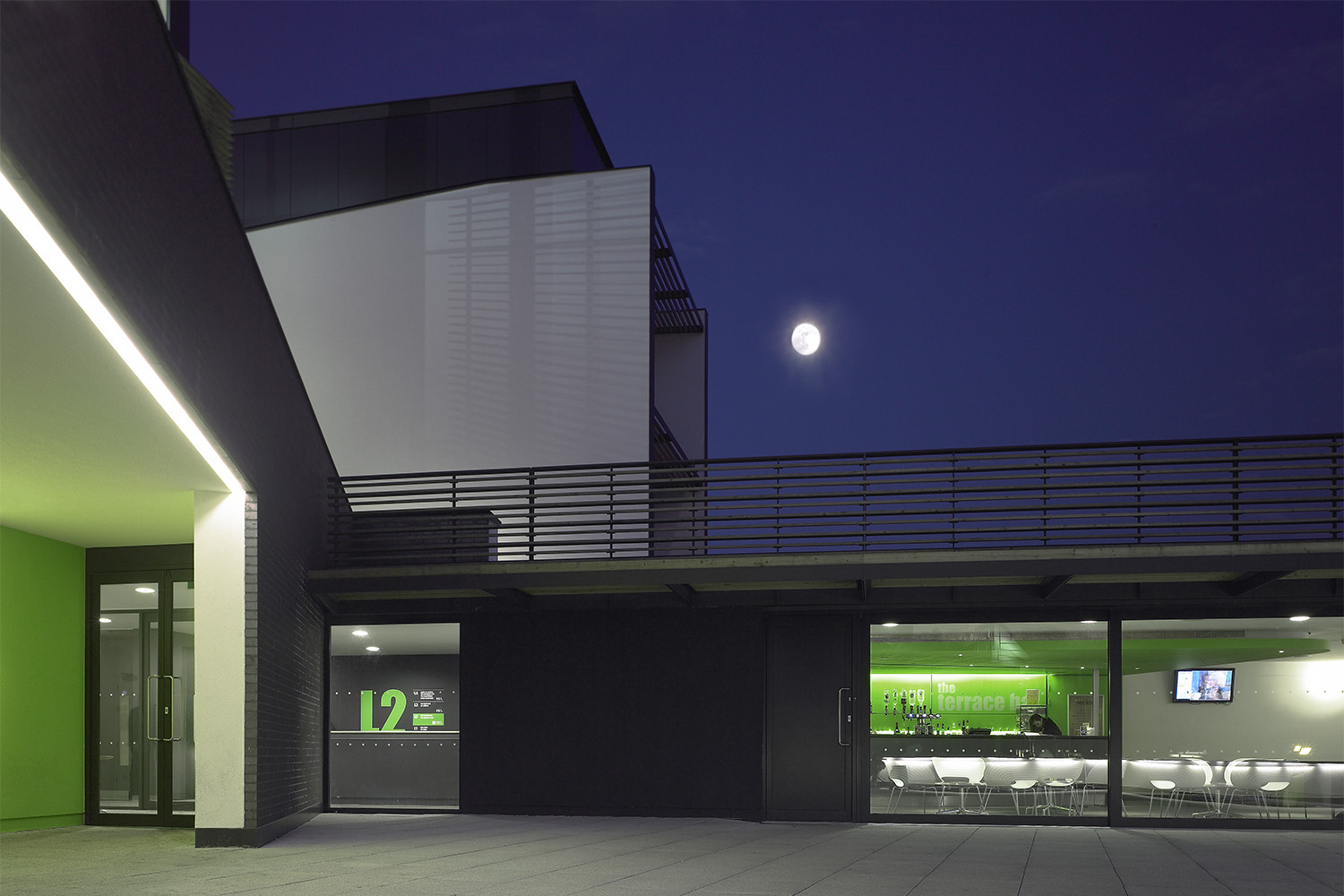 The building comprises of 3 main elements:

The lower part of the building is seen as a series of interlocking landscaped terraces that step up the site and form the ‘plinth’ of the building. The use of engineering brickwork has been chosen to reinforce the idea that this is a landscape element rather than part of the ‘building’. The south facing terraces incorporate generous steps using a silver grey paving ideal for students to meet and sit.

The roof is seen as a lightweight umbrella, which forms a ‘canopy’ over a section of the external landscaped terraces. The envelope to the foodhall and internet café is largely glazed with sunshading to prevent overheating of the internal environment. The form of the zinc roof was developed over considerable time and aims to create a unique 5th elevation to the scheme.

The linear block is seen as a counterpoint to the ‘lightweight’ food hall. It is a more solid element, reinforcing the edge of the campus. The use of an insulated render system ties the building back to the Stripe Theatre, which also uses this material. This element contains offices, meeting rooms, a service core and a bookshop. The roof top plant is hidden by a continuous enclosure using Trespa cladding panels to match the colour of the windows and curtain walling. The roof of this building is extended over the access road to the campus to create a porte cochere and literally a gateway to the university. 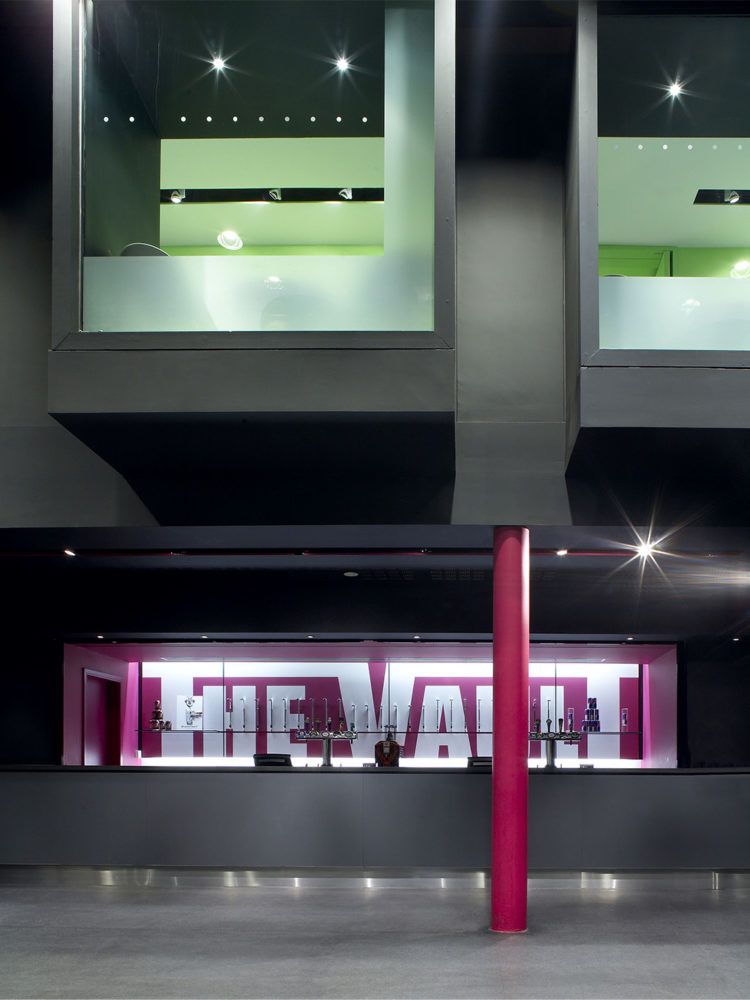 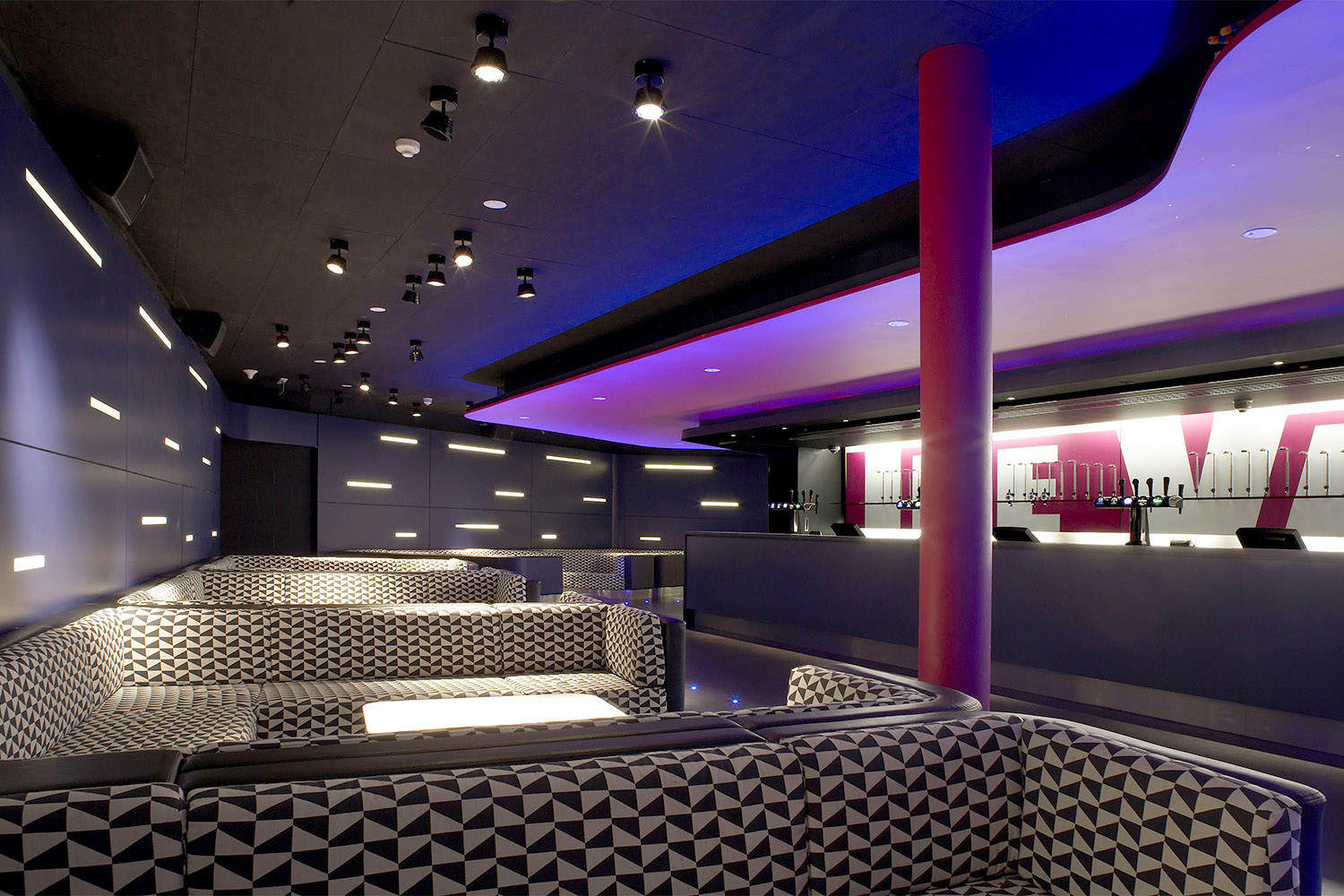